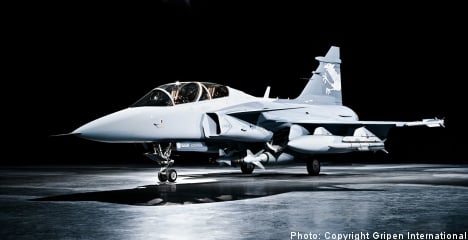 Citing US diplomatic cables recently released by WikiLeaks, the Aftonbladet newspaper reports that Norway’s supposed interest in the Gripen was just a show.

At the time, Norway’s choice of the American plane over the Gripen angered a former Saab executive.

“We are really surprised about how this was handled, what happened yesterday, and about the justification,” Jan Nygren, who served as Saab’s deputy CEO until two years prior to the decision, told the TT news agency at the time.

“And besides, we are just a tad surprised to say the least that they so unabashedly chose to criticize the Gripen, despite the fact that all of us involved know that the Gripen is a better fit for the functional demands laid out in the documentation included in the proposal request.”

The prelude to the snub included a 2008 meeting between Sweden’s defence minister Sten Tolgfors and the US ambassador at the time, Michael Wood.

During the meeting, Tolgfors asked for permission to buy the American-made Active Electronically Scanned Array (AESA) radar system for the Gripen.

But documents released by WikiLeaks describe how the Americans worked to scuttle the Swedes’ radar request.

“We suggest that we delay the decision about the ASEA-permit for the Gripen until after Norway’s decision,” read one US diplomatic cable, according to Aftonbladet.

The newspaper writes that the US embassy in Oslo also placed a “call for help” to Washington for assistance in putting high-level political pressure on Norway following negative reports about the F-35 in the Norwegian press.

After the call, prospects for the F-35 brightened; Norwegian politicians gave signals that made the United States confident its plane would win the Norwegian tender. But the Americans were careful not to claim that the aircraft purchase was a done deal before Norway announced its decision.

“We must continue to act like an honourable and elegant competitor,” read a cable from the US embassy in Oslo.

Swedish defence minister Sten Tolgfors refused to comment on the details of the leaked documents, saying he had no plans to contact the Norwegian government to find out exactly what happened with the failed Gripen deal.

“No, I’m not going to do that for the simple reason that when the decision came [about Norway’s choice of aircraft] we had had wide-ranging contacts with the Norwegian government, as well as with experts, because we needed to understand the valuation that Norway had made. It was important because we own and we push and will continue to push to own the Gripen plane for many years,” Tolgfors told TT.

Håkan Juholt, chair of the Riksdag’s Committee on Defence, and former chair in Sweden’s defence commission, believes the government has been naïve.

“I’ve always had suspicions that it was something other than the price and performance that was decisive in this deal,” he told TT, adding that it’s obvious that the tender wasn’t a questions of fair play.

“The Swedish government has been naïve,” he said, adding that a Swedish defence minister who a sitting US ambassador repors as loving the United States should perhaps not be seen as the toughest opponent one can have in a negotiation.