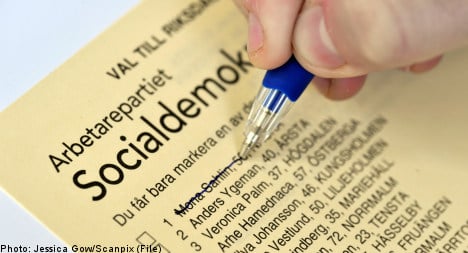 The report, which was presented to the Social Democrats’ governing board on Friday, points to proposals about taxes as a decisive mistake in the party’s bid to regain power.

Outgoing party leader Mona Sahlin is considering holding a keynote speech on Saturday during a meeting of senior Social Democrats tasked with drawing up the nominating committee ahead of the party’s extra congress, currently expected to take place in late February or early March.

“There I will take up what I think we need to do in the future, what strengths we have and where I believe we have failed,” Sahlin told the TT news agency.

Morgan Johansson, chair for a group within the party’s crisis commission tasked with carrying out a fact-based analysis of the election results, indicated that Social Democratic proposals regarding property and petrol taxes were a couple of decisive mistakes in the 2010 election.

“We had an advantage in the polls of nearly 5 percent in May and then we lost it. It can’t be explained in any other way than by the budget proposal we put forward then,” Johansson said when he came to the meeting of the Social Democrats’ governing board to present the commission’s findings.

“The property tax and petrol tax were two controversial proposals which affected many people and which contributed to why we lost so much support. They were a couple of miscalculations,” he said.

The Social Democrats’ proposal to reintroduce the wealth tax, on the other hand, likely didn’t play much of a role, according to Johansson.

“We don’t think it was very significant. Those who pay it don’t vote for the Social Democrats anyway,” he said.

The Social Democrats could have regained momentum when the party presented its election manifesto, he continued.

“But it was too thin,” said Johansson.

“In the election manifesto, there were only two new things.”

One was a 6 billion kronor ($868 million) reduction of value added tax for restaurants, which failed to win over voters because the centre-right parties had a similar proposal.

The other new item was a few hundred kronor reduction in the maximum fee that municipalities can charge parents who use publicly financed childcare, which Johansson claimed wasn’t enough to swing voter opinion.

“It would have been better to use the space we had for reforms in a different way,” he said.

The commission also found that the Social Democrats suffered a drop in support when they presented their Red-Green coalition, but it wasn’t enough to cost the party the election.

The head of the Social Democratic caucus in the Riksdag, Sven-Erik Österberg, has also been named as a possible successor to Sahlin, but he avoided comment on the speculations when asked on Friday about the prospect of leading the party, instead focusing on the process of electing new leadership.

“We have clear bylaws which indicate that people are elected every four years. We have said that the nominating committee can put all the seats up for renewal and initiate discussions with people who currently hold them. That’s all we can do. We can’t take a collective decision that everyone should relinquish their seats. It’s up to each individual,” he told TT.

Stefan Löfven, the head of the IF-Metall union, had also been tipped to possibly take over as the Social Democrats’ party leader, but he said on Friday he has no plans to stand as a candidate.