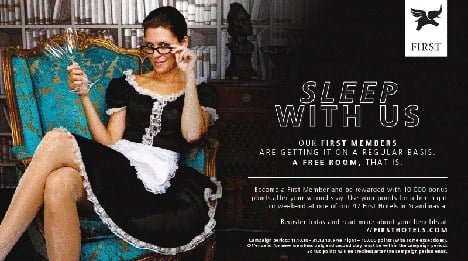 The two adverts, which respectively feature a bellboy and a chambermaid sitting on a bed under the text “Sleep with us”, are discriminatory and in breach of International Chamber of Commerce rules, according to the RO.

“By their clothing and pose they are presented as pure sex objects in a way that can be considered offensive to women and men in general,” the ombudsman argued in a statement on Friday.

First Hotels meanwhile argued that the adverts are intended to display the humour of its staff.

“We were surprised at the reactions of a few people and now the ombudsman. The humour in the ads is obvious,” said Michael Telling, President and CEO of First Hotels, to The Local on Friday, pointing out that the campaign has now finished.

The firm, which operates 47 hotels across Scandinavia, argued that the retro French maid and bell boy attire was evidence of this playful approach and rejected accusations of discrimination, pointing out that both sexes were represented in the ads.

“I think we did everything we could to be balanced,” Telling said, explaining that the campaign’s objective was to recruit members to its loyalty programme.

The ombudsman conceded that the models in the ads could be “considered to have some connection” to the product as they were at least dressed as employees.

However, several of those who reported the campaign argued that it appeared the hotel was offering prostitution services.

“The text ‘Sleep with us’ and ‘Our first members are getting it on a regular basis’ further strengthens the offensive impression,” the ombudsman argued.

The ombudsman detailed that the ads had a further feature with a clickable text inviting guests to “Go to bed”.

Michael Telling told The Local that the decision would not have an immediate impact on First Hotels’ future advertising policy, but underlined that the firm always tries to avoid giving offence.

“It is difficult to have a campaign which doesn’t offend somebody. but it is definitely not our intention to do so.”