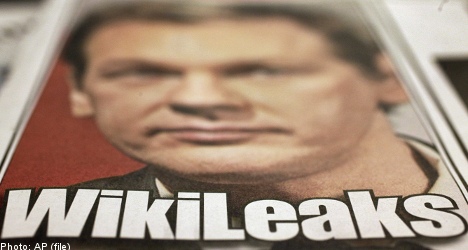 WikiLeaks publisher Julian Assange on the cover of the New York Post, December 1

The Times newspaper, citing police sources, reported that Assange — who is believed to be in Britain — could be arrested next week. Other media suggested that the 39-year-old Australian could face arrest within 10 days.

Swedish prosecutors have issued a new international arrest warrant for Assange on sex assault allegations that incorporated missing elements which had been requested by British police.

Assange broke cover on Friday to say in an online chat that he had boosted security after receiving death threats amid the storm that was unleashed by his site’s decision to publish 250,000 US diplomatic cables.

Meanwhile, the WikiLeaks website was meanwhile forced to turn to Switzerland for a new domain name after its original wikileaks.org address was shut down by an American provider, while Paris tried to ban French servers from hosting it.

The Swiss address — wikileaks.ch — was up and running again on Saturday after migrating to new servers, the group which owns the name said.

However, in a fresh twist, US-based online financial transactions service PayPal revealed on Friday that it would stop taking donations for WikiLeaks.

“PayPal has permanently restricted the account used by WikiLeaks due to a violation of the PayPal acceptable use policy, which states that our payment service cannot be used for any activities that encourage, promote, facilitate or instruct others to engage in illegal activity,” it said in a statement.

In a message on its Twitter feed, WikiLeaks blamed “US government pressure” for the PayPal ban.

Over the past several days, WikiLeaks has published dozens of cables, creating an international firestorm as American diplomats’ private assessments of foreign leaders and politics has been publicly aired.

US Secretary of State Hillary Clinton, who has described the leaks as “an attack on the world,” has contacted dozens of foreign leaders to smooth over friction and will continue to do so for the next weeks,” she told journalists on Saturday.

“I haven’t seen everybody in the world, and apparently there are 252,000 of these things [leaks] out there in cyberspace somewhere,” she said, noting with a smile that they had not yet all been published.

“So I think I’ll have some outreach to continue doing over the next weeks just to make sure that as things become public, if they raise concerns, I will be prepared to reach out and talk to my counterparts and heads of state and governments,” she added.

The release marked the third major publication of secret US files by WikiLeaks this year, after the site had published tens of thousands of American military files from the Afghanistan and Iraq conflicts. The US and other governments said the release of the documents were against their laws.

The latest cables showed US officials suspected that Yemen had a secret cache of shoulder-fired missiles that could have threatened US forces if the weapons fell into the wrong hands. Other cables highlighted what US officials described as Britain’s “paranoia” about its so-called special relationship with Washington.

In an online chat with The Guardian newspaper, Assange vowed on Friday to resist the “attacks against us by the US.”

“The threats against our lives are a matter of public record. However, we are taking the appropriate precautions to the degree that we are able when dealing with a superpower,” he wrote.

Amazon booted WikiLeaks off its computer servers on Wednesday after pressure from US politicians. The site then switched to French provider OVH, prompting a call from French Industry Minister Éric Besson for it to be banned from French servers.

WikiLeaks also adopted a Swiss address set up by supporters in that country, but this was taken offline hours later by then US host provider EveryDNS.net.

However, WikiLeaks was up and running on Saturday again after migrating to new servers. The Pirate Party of Switzerland listed another 21 websites where WikiLeaks could also be found, many of them European domain names, including its German counterpart.

The White House told government agencies on Friday to take measures to prevent employees without proper authorisation from accessing classified US diplomatic cables on WikiLeaks.

The US military in Iraq is also trying to prevent soldiers from viewing WikiLeaks documents and has posted a web advisory suggesting they could be breaking the law, a spokeswoman said.

Meanwhile, Afghan President Hamid Karzai said Saturday he doubted the credibility of the US diplomatic cables leaked by WikiLeaks, which portrayed him as corrupt and weak.

He said at least one of the incidents described in the cables could not have happened as described, while others were an attempt by US officials to discredit him and his government.