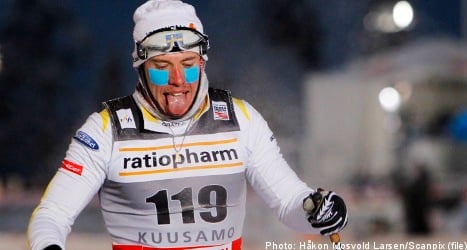 Jönsson after the men's 10 kilometre classical in Kuusamo, Finland, November 27

Jönsson, 25, beat Italy’s Fulvio Scola and Norway’s Oystein Pettersen on a circuit held in the city centre amidst subzero temperatures with a winning time of 3 minutes and 38.5 seconds.

Favourite Alexei Petukhov of Russia, who won a bronze medal at the Vancouver Winter Olympic Games for the team sprint, came fourth. Norway’s Ole Vigen Hattestad, who won the overall World Cup titles in 2008 and 2009, was eliminated in the quarter-finals.

The results of the World Cup event here will have no impact on the overall standings as none of the top three – Russia’s Alexander Legkov, Switzerland’s Dario Cologna and Sweden’s Marcus Hellner – raced in Düsseldorf.

The trio will all race next weekend in Davos, Switzerland, where they will be joined by world number one Petter Nothurg of Norway.

The double Olympic cross-country champion, 24, blamed fatigue when he pulled out of the first two events of the season in Gällivare in northern Sweden and Kuusamo, Finland. Northug is also the reigning World Cup champion.