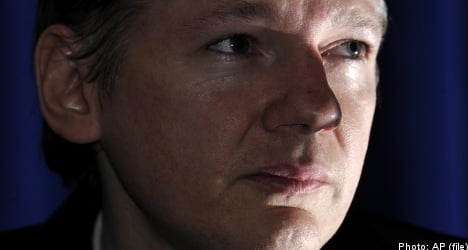 As fresh leaks of US diplomatic cables heaped more embarrassment on Washington, one report suggested that the revelations would force a major reshuffle of their diplomatic, military and intelligence staff.

Swedish prosecutor Marianne Ny, who is handling the rape allegations in Sweden, defended the pursuit of the case in comments to AFP Sunday.

“This investigation has proceeded perfectly normally without any political pressure of any kind,” prosecutor Marianne Ny said.

“It is completely independent,” she added.

It was Ny who successfully applied for the Interpol Red Notice against Assange, indicating that he was wanted for questioning over the allegations of rape and sexual assault against two women in Sweden.

Earlier on Sunday, Assange’s British lawyer, Mark Stephens, had expressed concern that the pursuit of Assange had “political motivations” in comments to the BBC.

“I can very clearly say no, there is nothing at all of that nature,” said Ny.

Stephens, in his comments, also warned that WikiLeaks had secret material in reserve, which he likened to a “thermo-nuclear device,” to be released if it needed to protect itself.

While it is not clear what this might be, WikiLeaks has already said it plans to release tens of thousands of files exposing abusive practices in US financial institutions.

WikiLeaks has been in the eye of a media and diplomatic storm since it started leaking US diplomatic cables from a collection of some 250,000 it had obtained, embarrassing and infuriating Washington.

Assange, who is believed to be in Britain, broke cover on Friday to say in an online chat that he had boosted security after receiving death threats. WikiLeaks says 831 cables have been posted to its site so far.

Among the latest revelations was one document that said Saudi Arabia was the key source of funding for radical Islamist groups, including Al-Qaeda, the Taliban, Lashkar-e-Taiba and Hamas.

Gulf states Qatar and Kuwait were also lax in pursuing locals who donated to the groups, said the cable, an assessment from US Secretary of State Hillary Clinton dated December 30th, 2009.

Austria’s defence minister on Sunday expressed his annoyance at leaked US cables complaining about his government and its “lack of interest in foreign policy.”

“We are waiting for clarification from the American ambassador,” said a spokesman for Norbert Darabos, who said the criticism, which specifically named the minister, “does not reflect a great understanding of politics.”

US news website The Daily Beast reported on Sunday that the leaks might have made it “dangerous” if not impossible for those found to have been strongly critical of corrupt or incompetent governments to do their job.

“We’re going to have to pull out some of our best people…because they dared to report back the truth about the nations in which they serve,” a senior US national-security official told the website.

The State Department, the Pentagon and the CIA were working on the assumption that they would be changing personnel at several US embassies and consulates in the coming months, the report said.

Meanwhile, WikiLeaks faced the prospect of a fresh attack on its financial lifelines. PayPal had already announced on Friday that it was terminating its dealings with it on the grounds that it was encouraging illegal activity.

On Sunday, the Swiss Post Office said it was checking Assange’s account with its banking arm after doubts emerged over the Swiss addres he had provided.

“We have to find out if Julian Assange really does live in Geneva. In the process of checking, we did not find his name in Geneva,” PostFinance spokesman Marc Andrey told AFP.

In an online editorial posted on Saturday, Assange denounced decisions by several companies to deny Wikileaks Internet or financial services.

“What we are seeing here are dangerous moves towards a digital McCarthyism. These actions, and the others like it, are not the result of a legal process, but rather, are a result of fear of falling out of favour with Washington,” he wrote on the WikiLeaks site.