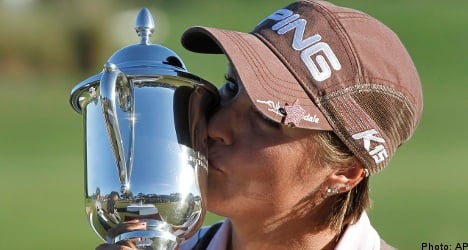 Hjorth’s fourth career LPGA crown was her first since the 2007 Navistar Classic and only her second since 1999.

Consequently, Taiwan’s Yani Tseng won the LPGA Player of the Year award and South Korean Jiyai Shin secured her status as the world number one at the end of the year. The Asian rivals were unable to overtake Hjorth or Yang over the last holes of the 2010 campaign.

Tseng has won three titles this ear, two of them majors, and became the first Taiwanese player to claim the top player award.

“I never thought I would be holding the trophy. Winning Player of the Year, this feels like I’m holding for a year. I have been working so hard to chase this title,” she said.

Hjorth, whose best prior showing of the season was a share of third place at Malaysia, had wanted to prove she could win after having taken a break from the tour to start a family.

“Every win is emotional for me, but being a mother and coming back after giving birth is definitely something that I’ve been hoping for. It’s nice to prove that it’s possible,” she said.

Hjorth finished 72 holes on five-under-par 283 with Yang, seeking a wire-to-wire win despite having never previously led after any LPGA round until this week, second on 284 after a final-round 74.

Choi edged Kerr for the Vare Trophy, awarded for the season’s low scoring average, after having clinched the year’s money list crown on Saturday.

“I wanted to win, but I think I did awesome,” Choi said.

“It’s hard to have it come down to the last tournament. I did great to give myself a chance. It will be a well-deserved rest,” she said.

Shin, who was at risk of being knocked from the season-ending world number one ranking after missing a cut to 30 players for the final round, kept the spot when Choi, Kerr, Tseng and Norway’s Suzann Pettersen could not pass her.

Yang, seeking her first title since winning the 2006 Australian Ladies Masters when she was 16, took a four-over-par eight at the third hole while sharing the lead with Hjorth, finding the water to leave her playing partner three shots clear of the field.

“I just made a weird shot. As soon as I hit it, it knocked down to the water,” Yang said.

Hjorth, who opened with a birdie, stretched her lead to four strokes as she made the turn, but Yang battled back, opening the back nine with three birdies in four holes, while Hjorth recorded bogeys at 12 and 13 to fall into a tie for the lead.

Hjorth birdied the par-five 15th to regain the edge and Yang took a bogey at the par-three 17th to drop two back.