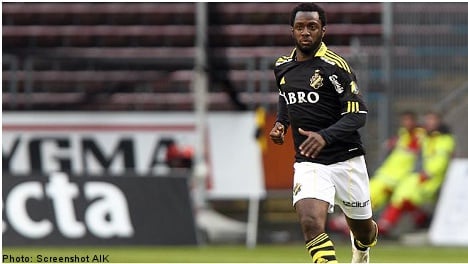 Johnson stood accused of assaulting a 22-year-old woman at his home in Solna north of Stockholm on May 27th, but the Solna District Court threw out the charges on Monday morning.

Johnson was detained on suspicion on rape on October 15th after he was arrested by the police three days earlier. He admitted to having had sexual relations with the woman, while maintaining his innocence of the rape charges.

The court ruling means that Johnson walked free from the court, which was not satisfied that the evidence was sufficient to remand him into custody.

AIK suspended Johnson in October after key sponsors demanded action after the midfield star’s arrest. Beer company Åbro, a main backer, had demanded the club suspend Johnson within 24 hours or lose its sponsorship.

Johnson has been involved in a series of scandals while playing for AIK and Häcken in Sweden. He was convicted of drink driving on several occasions, as well as assaulting his then-girlfriend in 2005, receiving a sentence of 60 days community service.

His arrest was the latest in a string of setbacks for Solna-based AIK, which was recently fined by UEFA following crowd trouble, which also provoked strong reactions from key sponsors.