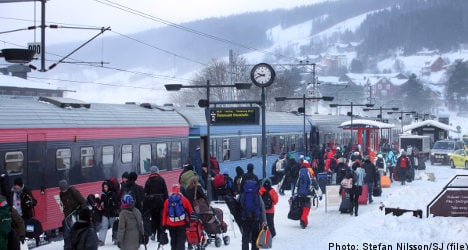 All branches except the rail industry raised their customer satisfaction grade from last year’s results.

Train travelers, however, dropped their rating of Swedish rail service from a 56.6 grade to 53.9, on a grading scale from 0 to 100, where a high grade correlates with a more positive judgment.

SJ’s grade fell from 55.6 to 52.8, and the national rail carrier also found itself at the top of the complaints league.

A quarter of the rail company’s customers have complained directly to SJ, and a fifth say that they have had reason to complain, without having done so.

“It’s gone so far that the slightest problem with trains is turned into a huge deal. The public already has a negative image of the company,” Parmler told the newspaper.

The company Bus 4 You was the most popular, with the grade 78, while other bus companies, such as Swebus and Go By Bus, all received a grade around 70.

Sverigeflyg had the most satisfied customers in the category domestic airlines, with the grade 73.8, and was closely followed by Malmö Aviation at 73.1. SAS pulled themselves up from last year’s result 61.2 to a grade of 67.6.

For international flights, the airline Norwegian was the most popular at 70.1, while SAS received 68.1.

Ryanair is bottom of the list with the grade 55.

Taxi 020 and Taxi Skåne both receive high grades from their customers. Taxi customers appear to be the most satisfied travelers, having given taxi companies 72.7, the highest overall grade of all sub-industries.

The results of the survey come from responses from 4500 customers who were asked their opinion on travel companies.

Swedish Quality Index regularly conducts surveys on customer satisfaction, and is a part of the European organisation EPSI Rating.