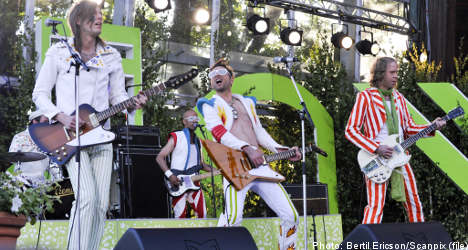 The Växjö group fronted by palindromic lead singer Ola Salo group will mark their 20th anniversary by releasing a greatest hits album and embark on a farewell tour.

“After the summer tour, the band will break up. We feel that we have accomplished what we have wanted artistically and that it is now time to move on with our lives,” the group said in a statement on Wednesday.

“The Ark has been a very big part of our lives and will always mean a lot to us. As such, we want to make our 20th anniversary celebrations in 2011 a real farewell party,” the group members added.

The tour for the new greatest hits album “Arkeology” kicks off on March 3rd, 2011 with two shows in Helsinki, Finland. The 14-date tour will pass through 13 cities in Finland, Sweden, Norway and Denmark until April 19th.

“In this way, we would like to pay tribute to those who helped make The Ark a phenomenon. The summer tour will be a fireworks display of hits, singalongs and bombast. See you next year!” the group members said on Wednesday.

“The greatest hits album sums up our career and our greatest hits. The spring tour will be a gift to the fans when we return to the stages we have performed on over the years to when we play these intimate and unique concerts,” the group added.

The new songs “Breaking Up With God” and “The Apocalypse Is Over” were written and recorded in November this year and produced in collaboration with Peter Kvint, whom the band worked with on “In Lust We Trust.”