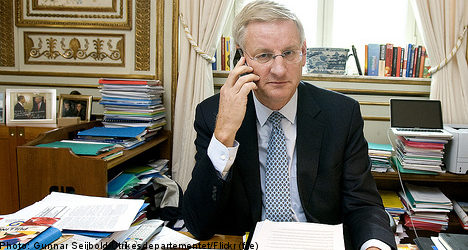 “The answer is no,” Bildt said in response to an AFP question whether there have been any contacts between Stockholm and Washington on the possible handing over of Assange to the US if he were brought to Sweden to face justice.

Swedish prosecutors have filed an international arrest warrant against Assange, who is accused of sexual molestation and rape. The 39-year-old Australian was arrested on Tuesday in the UK and made clear that he will fight extradition to Sweden.

“We have an independent judiciary, quite independently acting in accordance to the law and [which] does not have any contacts with Swedish political authorities or with any other authorities,” Bildt said.

During his brief visit to Belgrade, Bildt met with his Serbian counterpart Vuk Jeremic to discuss Serbia’s future on its path towards European integrations.

“Serbia is making a good progress, there are some outstanding issues, but the progress is quite evident and I think it will be recognised,” Bildt said.

In a statement on its website, the Swedish Prosecution Authority (Åklagarmyndigheten) explained that if the United States filed a request with Sweden for the extradition of Assange, the UK would, according to EU rules, also be required to give its consent.

“When it concerns extradition to a another member state there are rules which allow the country executing members state (the state which hands over the person in question), under certain circumstances, must approve a further extradition,” the agency said in a statement.

“When, on the other hand, it involves an extradition to a state is not a member of the EU, authorities in the members state which executed the arrest order (the state which hands over the person) must consent to such an extradition.

“Sweden cannot, therefore, extradite someone to the United States, for example, without such consent.”