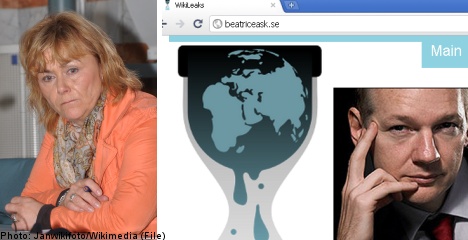 Web users who visit the site “beatricask.se” will instead find themselves visiting the whistleblower website WikiLeaks.

The minister’s spokesperson, Martin Valfridsson, told AFP that Ask had not previously used that domain name.

The Aftonbladet daily said the government’s official website, www.regeringen.se, was offline for a few hours overnight to Thursday, publishing a screen shot which showed the server could not be reached.

The site was working normally again later in the day.

It remains unclear who is behind the Beatrice Ask website and the attack on the government website, both of which come online the day after hackers attacked websites for the Swedish Prosecution Authority (Åklagarmyndigheten) and the law offices of Claes Borgström, the attorney representing the two women who allege they were sexually molested by WikiLeaks founder Julian Assange back in August.

A group of internet activists operating under the name “Operation Payback” has claimed credit for the attacks on the Borgström and the Prosecution Authority.

The two attacks were part of a wider effort, “Operation Avenge Assange,” directed at organisations deemed by the group to be opposed to WikiLeaks.

Credit card companies Visa and MasterCard as well as online payment service PayPal were also targeted by the group for the companies’ decisions to stop processing payments to WikiLeaks.

“It’s the wild west out on the internet right now,” IT expert Joakim von Braun told the newspaper.

Government spokeswoman Mari Ternbo told AFP the government did not comment security matters and could not confirm the cyber attack had taken place.

Assange, a 39-year-old Australian, is being detained in London pending a hearing on extradition to Sweden, where he is wanted for questioning over rape allegations.