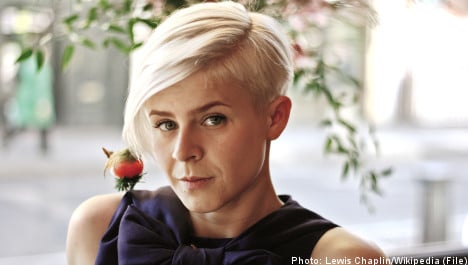 “I do things that are important to me, and if that in turn can inspire other people that’s marvellous. It is something nice and something that makes me glad,” Robyn, whose given name is Robin Carlsson, told Fokus.

In picking the 31-year-old singer-songwriter, the magazine cited her ability to reach the top of the showbiz world without selling out.

“In her ways and with her conscious artistry she has proven that it is possible to reach the highest levels of popular music without being shallow,” Fokus said in its citation.

The magazine also praised Robyn’s enterprising efforts to maintain control over her career.

“By releasing her records on her own label, she demonstrates great entrepreneurship, which also enables her to have complete control over her creative process. In all her characteristics, she is a role model to both young girls and boys as well as to men and women,” the magazine wrote.

The Stockholm-born artist is finishing up a landmark year in her career, having released three albums known as the Body Talk series.

The first single, Dancing on My Own, released in June, went to number one in Sweden, marking the first time one of her singles made it to the top of the Swedish charts.

Fokus editor-in-chief Martin Ahlquist explained that the six-person jury who selected Robyn was at first sceptical about naming a pop star as Swede Of The Year.

“But the more we talked about it, the more it became obvious that she fulfilled the primary criteria for the reward, which includes doing something extraordinary and changing society for the better,” Ahlquist told The Local.

When asked how a pop star can change society for the better, Ahlquist highlighted Robyn’s “sound principles.”

“She stands for something that comes from insider herself and without a political message,” he said.

“It’s something more powerful, the idea of independence and that being who you are is sufficient. In that way, she is a fantastic role who can have a positive impact on people’s lives.”

At several points in her career, Robyn could have chosen the easy road to success, but decided not to take any short cuts, Ahlquist explained.

As a result, she has maintained control over her music and the creative process and shown that it’s possible to achieve worldwide fame on one’s own terms.

“She is a person with unparalleled integrity that is an inspiration to everyone who feels they may be trapped by the boundaries or stereotypes of others,” said Ahlquist.

“Robyn proves we don’t have to follow along with what other people expect for us, but that we can achieve things the way we want to.”