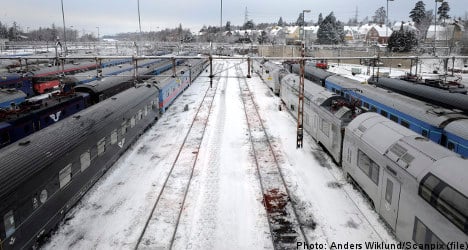 Although winter has only just gotten under way in the country, train delays have already crippled Sweden’s rail system.

“Passengers are deeply inconvenienced,” Riksdag transportation committee chair Anders Ygeman pointed out when when several of those responsible for recent rail service disruptions were questioned in the Riksdag on Thursday.

He pointed out that although the winter has barely begun, passengers have endured train delays, cancellations and even evacuations.

Stockholm county governor Per Unckel presented the investigation he undertook after last year’s train disruptions, which showed a lack of snowploughs and facilities for de-icing vehicles.

SJ’s Forsberg stated that the 80-point action plan that was drawn up after last winter has been largely implemented.

Several short-term measures, many of which have already been implemented, include emergency plans, better weather forecasts and plans to reduce traffic so that departures are adjusted to ensure other traffic flows better.

“Our Achilles heel was that we had damaged vehicles, which resulted in a delicate situation for us,” he said.

Forsberg pointed out that the express X2000 trains are 17 years old and in great need of a facelift.

He noted that it has increased de-icing capabilities, improved the protection of train underframes, reinforced locomotive parts against elk collisions and made better preparations to inform passengers when traffic problems arise.

“If we get a winter like last year, we will go with a 20 percent reduction,” said Forsberg.

When asked if the vehicle situation is worse than last winter, Forsberg replied, “Yes, it is, unfortunately.”

An X2000 train has been removed from service completely due to a train crash in Östergötland in September.

In addition, three X2000 trains have been set aside for review since they were the three vehicles SJ have had the most problems with. Another seven to eight InterCity trains have also been taken out of service after cracks were discovered in the wheels of a locomotive in Norway last autumn.

“This of course means that if there are traffic problems, we are just at the limit of what we need, or precisely, we have less than what we need,” said Forsberg.

He was unable to reassure passengers that trains would arrive in time for Christmas, adding it costs money to have functioning train service.

“There is talk of resources and readiness. However, soon, there will only be one old guy left out there shoveling snow,” he said, pointing out the staff reductions that have occurred in recent years.

Preparations that were supposed to have been carried out on October 15th have not been accomplished, he added.

“Fifty hours after a class 2 weather warning in Malmö is definitely grounds for an inquiry,” said Nadérus.

He also cited problems with switches that have loose screws and the lack of maintenance on overhead lines at the same time as a major reallocation of investments and maintenance have been transferred from rail to road.

“One cannot remove snow at the desk. At the end of the day, it requires a responsible human being,” he said.

New statistics from the Transport Administration revealed that November was a problem-filled month for trains. The punctuality of passenger services was 86.2 percent compared with 90.2 percent in October.

Punctuality refers to trains that are not more than five minutes late.