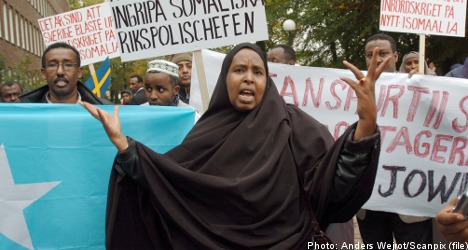 Prior to a 2008 visit to Gothenburg by officials from the US embassy in Stockholm, Bill Werngren, head of the city secretariat’s information group and now Gothenburg’s election director and the husband of municipal executive board chairwoman Anneli Hulten, made contact with the embassy, according to newspaper Göteborgs-Tidningen (GT) on Friday.

He sent the embassy a series of articles from newspaper Göteborgs-Posten (GP) published in 2007 about the integration challenges in and isolation experienced by the city’s Somali community.

He wrote in a memo that the situation in Gothenburg reminded him of the phrase, “Houston, we have a problem.”

He also described the articles as “interesting and quite horrible reading” and welcomed the visit as a vehicle for engaging community leaders in dialogue.

Moderate Party member Abdirisak Waberi, who was elected to the Riksdag in September 2010, was invited to meetings with US embassy staff in his role as the principal of the Römosse school, a publicly funded, privately managed free school in the Gothenburg neighbourhood of Gårdsten.

According to the cable, Waberi was pessimistic about the situation for fellow Somali-Swedes.

“Those who have immigrated to Sweden ‘will never feel like Swedes’ which created a sense of alienation,” reads the report of the meeting.

The US Embassy later sent a report to Washington about its conclusions regarding its visit to Gothenburg.

“The discontent immigrant community leaders expressed at the discrimination faced by Muslim job seekers was matched by the frustration of city officials who, in the words of one official, feel that 30 years of programmes aimed at integrating Muslim immigrants ‘have not worked,'” the leaked cable stated.