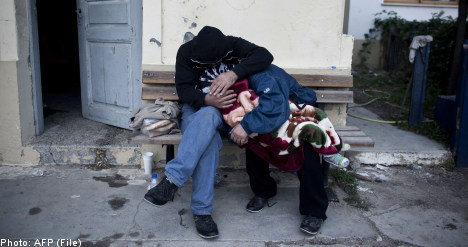 Immigrants sleep outside a train station in Greece on October 4, 2010

The UN has also noted the “squalid overcrowded facilities” and inhumane conditions for refugees in Greece.

As a result, the court has deemed the treatment of asylum seekers in Greece as unacceptable and has halted Sweden from sending back refugees who first set foot in the EU there.

The actual case facing the Swedish court concerns a family of three who will now have their asylum applications examined in Sweden instead. Since the court’s decision is a precedent, it means that asylum seekers who find themselves in Sweden and have a transfer decision to Greece cannot be sent there.

“However, that does not mean they get a residence permit, only that it should be examined here in Sweden instead,” Catharina Lindqvist, a judge at the court, told news agency TT.

Transferring asylum seekers to Greece is incompatible with the alien act and could constitute a violation of the European Convention on Human Rights, the court stated in a ruling on Friday.

According to the court, the conditions that asylum seekers in Greece face are unacceptable.

The court’s criticisms did not mince words. In many cases, it was not even possible for asylum seekers in Greece to submit an application for asylum. If an asylum seeker succeeded in submitting an application, it was highly uncertain that the trial would be legally reliable.

“There is a great risk that their applications are not examined if they apply there,” said Lindqvist.

The court also pointed out the grim conditions that are in place for those who come to Greece.

“We have established that the reception is very poor. They do not have housing or food and can be forced to live in parks. This results in a number of sanitary difficulties,” said Lindqvist.

The asylum system and reception in Greece have further deteriorated as the country’s debt crisis has become increasingly acute. The UN, the courts, humanitarian agencies have also slammed the reception the refugees receive in Greece.

“The asylum process as such in Greece does not live up to the standard that one is entitled to expect of a country that has an obligation to comply with EU regulations,” the court said, calling the treatment “inhumane.”

In October, UN special rapporteur Manfred Nowak called conditions for migrants in Greece too “inhumane” because of “squalid overcrowded facilities,” a poorly trained police force and a sharp increase in the number of migrants.

The European Commission has threatened several times to take Greece before the European Court of Human Rights. The court is currently reviewing several migration matters relating to Greece.

It is estimated that Greece faces about 50,000 untested asylum cases. Out of over 30,000 asylum applications in Greece last year, only 36 individuals were granted refugee status, while 128 had protected status.

In early November, the Swedish National Migration Board (Migrationverket) halted all transfers of asylum seekers to Greece under the Dublin Regulation with the expectation that the court would put its foot down.

Under the European Union’s much-criticised Dublin II regulation, illegal immigrants must be sent back to the country where they entered the EU.

About 75 percent of more than 40,000 people caught illegally entering the EU in the first half of this year did so through Greece.