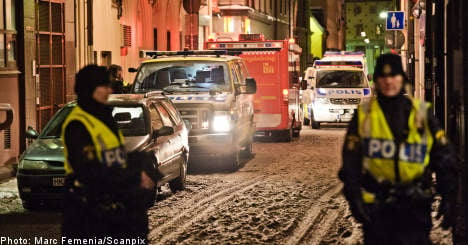 The Swedish Security Service (Säpo), raised its threat level to “elevated” in early October, the first time the Swedish authorities have been on such a high level of alert.

The level was raised after Sweden’s National Centre for Terrorist Threat Assessment (NCT) said there had been “a shift in activities among certain groups in Sweden, judged to be targeted at Sweden.”

Säpo also reported in October that it believed a handful of Swedish residents had travelled to Pakistan and Afghanistan to attend terrorist training camps.

John Daniels of the Swedish Military Intelligence and Security Service said at the time that a number of people in Sweden had “the intention and the capacity to carry out attacks agains Swedish targets.”

Until now, though, such warnings have not translated into attacks on the ground. Previously uncovered Sweden-related terror plots have targeted specific individuals or have involved Swedish-based extremists aiming to attack targets abroad.

Swedish artist Lars Vilks has been the target of numerous threats after he portrayed Muhammad, the Muslim prophet, as a dog. American Colleen R. LaRose, also known as ‘JihadJane,’ was charged last year with trying to recruit terrorists to murder him.

Sweden’s military presence in Afghanistan, as part of the Nato-lined ISAF force, has also been put forward as possibly raising the threat to Sweden.

The apparent realisation of the threat against Sweden was a worry, a top Swedish terror expert said on Saturday:

He explained that suicide bombers rarely act on their own, but often receive psychological and other types of support from others.

“Based on my experience, it’s one thing if it’s just a car fire. But to go and put together pipe bombs and sacrifice your life – I’d be very surprised if he didn’t have contact with other individuals.”

Ranstorp cautioned, however, that it was too early to say whether the man who apparently blew himself up in Stockholm on Saturday has ties to any established terrorist networks.

Much of the Swedish anti-terror effort has in recent years been focused on Swedes of Somali descent working for Somalian terror organization al-Shabaab. According to Säpo, the al-Qaeda linked group has recruited more than 20 young people from Sweden to fight in the war-torn African country.

In Wednesday, just days prior to Saturday’s blasts, two Swedish citizens of Somali origin who were members of al-Shabaab were sentenced to prison by a Swedish court for “planning terrorist crimes” in Somalia.

In a separate incident, three people arrested in an investigation into an alleged terror plot in Gothenburg in October were released without charge after police decided that the men posed no credible threat.