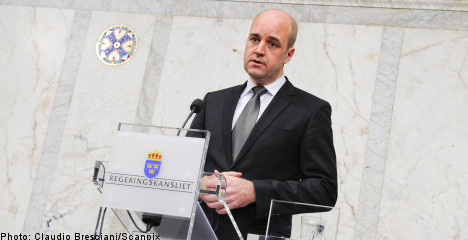 Sweden’s Prime Minister Fredrik Reinfeldt warned Sunday against drawing hasty conclusions with regards to the terror attacks in central Stockholm at the weekend.

“Three things happened last night, a car exploded … a man died and (intelligence agency) Säpo and (news agency) TT received a message threatening Sweden. The three events are not confirmed as having any link to each other,” Reinfeldt told reporters.

“This is both unwanted and unacceptable,” he said.

“It’s unacceptable because Sweden is an open society, and an open society which has shown it is willing that people with different beliefs and backgrounds and gods can live side by side with each other in an open society and democracy that functions well,” he said.

He stressed it was important not to jump to conclusions when asked about Foreign Minister Carl Bildt’s comments describing the events as a “most worrying attempt at terrorist attack” on his Twitter feed overnight before police confirmed they were investigating a terrorist crime.

“Carl Bildt is a foreign minister who is very present and very active on social media, but it is here and now that I am commenting from the government’s perspective,” he said.

“It’s completely unacceptable for this to happen in Sweden but a lot of questions still have to be answered before we can draw any conclusions,” Reinfeldt said.

“We need more facts and we need to of course discourage reactions to this until we know more,” he added.