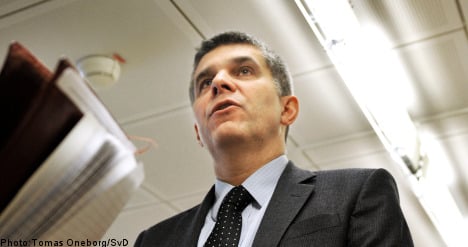 Anders Thornberg of Säpo speaking the day after the Stockholm blasts

Anders Thornberg, who heads the security unit of Swedish intelligence agency Säpo, told AFP his investigators were trying to find out if Saturday’s attack was part of a broader threat to Sweden or an isolated attack.

“We are trying to find out if something similar is going on (elsewhere in Sweden). We don’t have any indication about that, but we will try to make sure this was a single action,” Thornberg said in an interview.

The attacks were labeled a “terrorist crime” on Sunday by Sweden’s chief prosecutor.

“If you blow up a bomb with a certain purpose, to make people afraid, to make society less safe and so on, it is a terrorist crime.”

“The investigation is going on 24/7 and we are now led by the prosecutors. We are trying to get a clear picture of what is going on,” Thornberg said.

But he said it was too early to say if the two blasts, within a few hundred metres and about 15 minutes of each other, were linked.

“We think so but we are still investigating,” he told AFP.

On October 1, Säpo said in a statement it was raising the threat of “terrorism targeting Sweden” from low to elevated, to level three of a five-level scale.

Thornberg said there was no immediately obvious link to the attack and the elevated threat level.

“We cannot see any link. But we can’t say no either,” he said, adding that the terrorism threat level was monitored every day.

Säpo has not hiked the level any higher since Saturday’s attack.

When asked about security measures surrounding Lars Vilks, the Swedish artist who drew the prophet Mohammed with the body of a dog and who was named in an emailed threat received by Säpo and Swedish news agency TT before the blasts, Thornberg said he could not comment on individuals.

“We cannot comment about threats against a certain person, but if there is a threat, we will protect all people around Sweden,” he said.