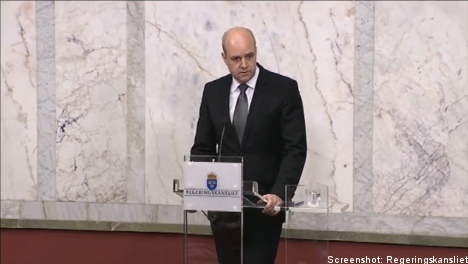 Shortly after TT received the message, two blasts rocked central Stockholm, spreading panic among dozens of holiday shoppers in the vicinity, in what Swedish intelligence officials have labeled a act of terrorism.

“We will naturally take it very seriously. However, it is too early to say whether it was an isolated single actor or if there are links,” Reinfeldt said on Monday, noting that it was clear from the beginning that the crime was serious and could have ended far worse.

“The important thing now is that we gather more facts and let the justice system uncover the aim and see if there are additional links. There are still many answers that we are missing and it is important to be patient now and not jump to conclusions,” he said.

Reinfeldt also received a number of questions about Carl Bildt’s tweets on his Twitter account in which Sweden’s foreign minister referred to the blasts as “terrorist attack” before investigators had done so.

“It is I who inform on the government’s behalf. Then there’s social media for passing along individual comments. It has its value, but it is a different thing,” he said.

Bildt spoke about a terrorist attack long before the police or the prime minister did.

“Obviously I knew what I tweeted about,” Bildt said in response to the question asking what he knew when he wrote his short Twitter message.

Bildt has been criticized for his message, but defended his actions.

“It is the week’s pseudo-debate with a big P,” said Bildt while on his way to a foreign ministers’ meeting in Brussels.

The Riksdag’s defence committee chairman Håkan Juholt has criticised Reinfeldt for the delay in informing the Swedish people about the attack.

In his defence, Reinfeldt replied, “It is important not to play party politics about this. It brings up a number of questions that we do not yet have answers for and for me, it was important to not go out in a situation where there were no legal decisions.”

He added, “To then make statements could have instead led to increased uncertainty, speculation and casting of suspicion. I wanted to wait for the prosecution to make a decision on an investigation into terrorist crimes.”

“I am convinced that if we went about it the other way and I went out and commented without identification and no reaction from the police and the prosecutors, many would have had objections,” said Reinfeldt.

Johan Hirschfeldt is the chairman of the emergency commission set up after the tsunami of Christmas 2004 in southeast Asia.

He declined to comment on the appropriateness of the first information about the terrorist bomber coming from a twittering foreign minister, followed by a 12-hour delay before the prime minister held a press conference.

“I am satisfied with referring to what we wrote in the report,” he told TT while indicating the exact pages in the report published by the commission on how the Swedish government reacted to the disaster.

The report warned that the development of new media and the public’s own new channels of information can result in the risk of the gap between the official picture and the citizens’ own “becoming very large very quickly.”