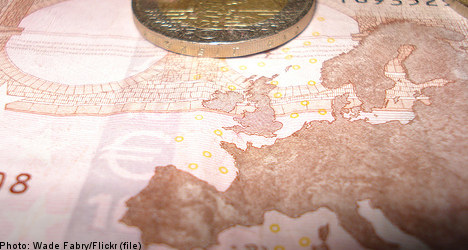 About 13 percent of respondents said that they did not know how they would vote. The percentage of no votes has decreased compared with May, the agency added.

In May, 60 percent of Swedish respondents indicated that they did not support euro accession, the highest level in the twice-yearly measure since November 1997, compared with 27.8 percent in favour and 12.2 percent who were in unsure.

Support for the euro among Swedish respondents peaked in May 2002, when it was slightly above 45 percent.

In November 2009, 43.8 percent of respondents declared support for the euro, just ahead of 42 percent who were not in favour of the measure, while 14.2 percent did not know how they would vote.

In November, about 60 percent of female respondents said that they would vote against joining the euro in a referendum, compared with about 62 percent in May. At the same time, the proportion of yes votes among women has increased from about 24 percent in May to about 26 percent in November.

Separately, the proportion who said they mainly support Sweden’s EU membership was about 56 percent, with about 19 percent against and 25 percent stating no opinion.

The party preference survey comprised telephone interviews of a national random probability sample consisting of 9,054 respondents entitled to vote in the parliamentary election without an upper age limit.

Among the respondents, 13 percent could not be reached (including unlisted telephone numbers and those without telephones), 3.3 percent were too ill to be interviewed and 15.3 percent declined to participate.

The total non-response rate was 31.6 percent. A total of 6,192 interviews were conducted. In addition, certain individuals did not want to answer certain questions.