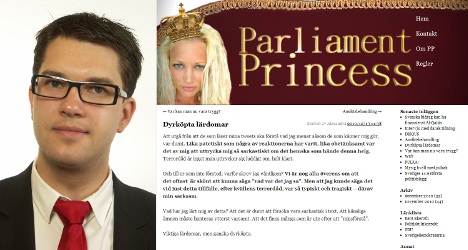 “The Sweden Democrats demand a current debate in parliament about violence-prone Islamic extremism. The party proposes that the debate, due to large public interest, be held as soon as possible,” said the party, which won its first parliamentary seats in September.

Separately, newspaper Svenska Dagbladet (SvD) reported on Tuesday that Alexandra Brunell, secretary to Sweden Democrat party leader Jimmie Åkesson, has come under fire from other political leaders after tweeting the word “Finally” on her Twitter account shortly after suicide bomb attacks that took place on Saturday in Stockholm.

Brunell, a 20-year-old model who also operates the blog ParliamentPrincess.se, followed up her first tweet with, “is it now one can say ‘what was it we said’?”

Sweden Democrat MP William Petzäll echoed his colleague’s sentiments on Sunday evening, tweeting, “I hate to say this, but what was it that we said?,” according to SvD.

Åkesson said that Brunell’s statements should not be over-analysed and denied that the Sweden Democrats would welcome a terrorist attack.

However, he refused to distance himself from the comments either, instead saying he hoped they would spark a debate, a wish he echoed Tuesday in the Riksdag.

The Sweden Democrats’ urging for debate on Islamic extremism came just days after a man strongly believed to have been Taimour Abdulwahab carried out the first-ever suicide bombing in Sweden.

He was carrying a cocktail of explosives and is believed to have mistakenly set off a small explosion near a crowded pedestrian street. He killed himself before he could carry out what, according to the lead prosecutor on the case, appears to have been a mission to murder “as many people as possible.”

Abdulwahab, who was known for his outspoken views in favour of violent jihad, was the only person killed when some of the explosives he was carrying detonated, but two others were injured when his car exploded nearby minutes earlier.

“There is today a large public interest in a debate around these questions. People want to know how we as politicians look at Islamic extremism and what the preventive work looks like,” Åkesson said in the statement.

In addition to the bombing, several recent events made such a debate pertinent, he said, pointing to last week’s jail sentences handed down to two Swedes for “planning terrorist crimes” in Somalia and to an intelligence report to be published on Wednesday about violent Islamic extremists in Sweden.

“It is my hope that we can have this debate in parliament before Christmas,” Åkesson said.

Separately, Brunell used her blog on Monday to apologise for her Twitter postings, calling the incident an “important lesson, but rather hard-earned.”

“As pathetic as some of the reactions have been, it was equally thoughtless of me to express myself so sarcastically about the terrible things that happened this weekend,” she wrote.

“What have I learned from this? That it is foolish to try to be sarcastic in writing. That sensitive issues must be handled with extreme care. That there are many who are out to ‘misunderstand,'” she added.

Eric Myrin, the Sweden Democrats’ press secretary, emphasised in the SvD report that Brunell’s role in the party is not a political one and that she made the comments as a private person.

“It’s a ‘finally’ even from Åkesson and I think that it is a shocking starting point, that one longs after having increased conflicts and antagonisms in society to benefit from it politically. The threat of terrorist attacks has been in Sweden, we have known this all along,” he told SvD.