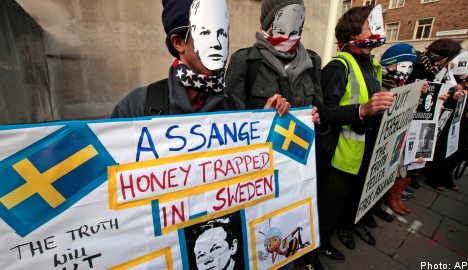 The appeal is expected to take place within 48 hours.

In a chaotic 30 minutes outside the court, Assange’s lawyer Mark Stephens had earlier wrongly told reporters that Sweden would not appeal the granting of bail for the Australian who founded the whistleblowing website.

The 39-year-old Australian had given a thumbs-up to the packed courtroom in London as the judge granted him conditional bail, one week after being arrested at the request of Swedish authorities.

But two hours later, lawyers for Swedish prosecutors announced that they would appeal the ruling, meaning the case will now go to Britain’s high court and a new hearing must be heard within 48 hours.

Until that time Assange, who denies the allegations, must stay in his cell at Wandsworth prison in London.

“This is really turning into a show trial,” Assange’s lawyer Mark Stephens told reporters after hearing the Swedish decision.

“They clearly will not spare any expense to keep Mr Assange in jail.”

District judge Howard Riddle had earlier granted bail worth £240,000 ($378,000) but ordered that Assange wear an electronic tag, abide by a curfew and live at the country estate of a supporter.

“I am satisfied that the conditions I am going to impose will make it certain as far as the risk of flight is concerned,” Riddle told City of Westminster Magistrates’ Court.

Celebrity supporters in court included socialite and campaigner Bianca Jagger, while US filmmaker Michael Moore offered to put up bail. Assange’s mother Christine had flown in from Australia and was also in court.

The announcement of bail prompted cheers from about 20 supporters who had staged a protest in support of Assange outside court, but the response became muted as it emerged that he would not yet be free.

Even if Sweden had not appealed, Stephens said the court had demanded that those standing bail for Assange come up with 200,000 pounds in cash before he could be freed — and this was unlikely to be raised immediately.

Another member of the legal team, high-profile human rights lawyer Geoffrey Robertson, earlier told the court that the rape and molestation allegations made against his client by two Swedish women should not be taken seriously.

“It was very clear this is not an extremely serious offence. It is arguably not even a rape offence,” Robertson said.

He added that Assange was being held in “Victorian” conditions in prison and was being detained in solitary confinement and allowed just one visit per week.

Assange was arrested on December 7 after giving himself up to police acting on an extradition warrant from Sweden.

His legal team has condemned the claims as politically motivated, noting their timing coincided with WikiLeaks’ release of thousands of secret US diplomatic cables which have touched off a global storm.

Swedish prosecutors insist their investigation is based on law.

Wearing a dark suit and a white shirt, Assange spoke in court Tuesday only to confirm his name, date of birth and address in Victoria, Australia.

His next appearance at the court is on January 11, with a full extradition hearing set for February 7 to 8.

Earlier, Assange blasted three global giants which have stopped money being sent to his website — credit card companies Visa and MasterCard and the Internet payment firm PayPal — and accused them of being US puppets.

PayPal has said its decision to restrict the WikiLeaks account was not the result of any US pressure.

The three firms have been attacked by computer hackers for their stance.

In a statement to Australia’s Channel 7, he also said WikiLeaks would not stop releasing the data, which has included candid reflections from US diplomats of world leaders and global events.

“My convictions are unfaltering. I remain true to the ideals I have expressed,” Assange said, in a statement from prison he dictated to his mother.

US President Barack Obama has led worldwide condemnation of the leaks, dubbing them “deplorable”, and Washington is pursuing a criminal investigation into how WikiLeaks obtained the information.