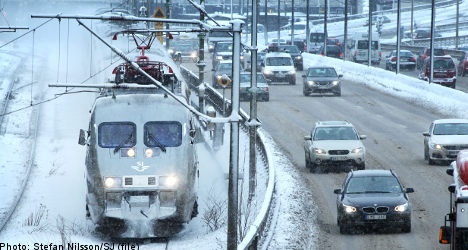 However, SJ head Jan Forsberg also listed a number of measures that have been taken to help the train operator deal with future demands on Sweden’s rail system.

And with an estimated 1 million Swedes expected to travel by train this holiday season, Forsberg was also cautiously optimistic about SJ’s ability to handle the holiday travel rush, although he stopped short of making any guarantees.

“Our ambition is that we will try to make sure that Christmas travel goes as well as it possibly can,” he said.

He pointed out as well that Sweden’s National Transit Authority (Trafikverket), which oversees the country’s entire rail network, must also take responsibility for ensuring that the trains run on time.

According to SJ board chair Ulf Adelsohn, 80 percent of train delays can be attributed to the rail system, rather than the trains themselves.

“The signaling system, switches, overhead contact lines and signal boxes are the most important. We simply want to be able to arrive,” said Adelsohn.

He added that SJ’s finances are in good shape and it has enough money to implement measures to deal with Sweden’s winter weather.

“Today the board has decided, among other things, to invest in 20 new high-speed trains,” Adelsohn said.

The new trains will replace the current fleet of X-2000 trains and will be able to reach speeds of 250 kilometres per hour.

But SJ is going to let the government have the final say – the decision to spend the estimated 5-6 billion kronor ($730-880 million) will be made at the company’s upcoming annual meeting.

He went on to confess that the X-2000 fleet is “a little worn down” and considers the new trains as important to ensuring that Sweden isn’t “left without” a high-speed rail system in the coming years.