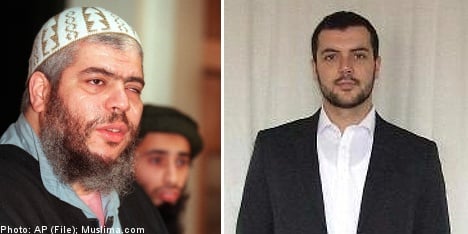 They also said that other voices could be heard on an audio message the suicide bomber sent out before Saturday’s attack near a busy pedestrian shopping street in the Swedish capital.

The Svenska Dagbladet (SvD) daily reported, quoting sources with insight into the case, that British police were looking into a possible connection between Taimour Abdulwahab, who is strongly believed to have been the Stockholm bomber and Egyptian-born Hamza.

Hamza, the former imam of the once-notorious Finsbury Park mosque in north London, was jailed in Britain for seven years in 2007 for inciting followers to murder non-believers.

TV4 meanwhile reported that it had hired a sound technician to analyse the audio message the Stockholm bomber sent to police and media shortly before he first blew up his car and minutes later himself.

“There are at least two people” heard on the message, sound technician Johan Öhgren told the commercial broadcaster.

“It is not possible to speak while breathing in. You can clearly hear there is someone else in the room,” he added.

Police have yet to confirm that Saturday’s bomber, who was the only person to die, had helpers.

The bomber was carrying a cocktail of explosives and is believed to have detonated a small charge prematurely, prosecutor Tomas Lindstrand said Monday.

Two other people were injured when his car exploded nearby minutes earlier.

He is believed to have driven the car he bought in November from there to Stockholm before it exploded Saturday, and police are reportedly scanning the surveillance tapes to see if more people made the trip with him.

Säpo has also requested all pictures of cars that exceeded the speed limit taken by cameras along the route from Tranås to Stockholm on Saturday in the hope of seeing a shot of the bomber and his possible accomplices, Expressen reported.

Säpo and the lead prosecutor on the case were scheduled to give a press conference here Thursday afternoon.

The security service has been harshly criticised in Sweden for not seeing the threatening audio message sent to it from the bomber minutes before the explosion until nearly five hours after the attack.

“It is worrying that it took so long,” terror expert Magnus Ranstorp told the TT news agency Thursday, adding that the delay was “symptomatic of the fact that there has never before been this kind of crisis (in Sweden). The (intelligence) system and organisation is overwhelmed.”

Säpo, which published a report Wednesday saying it knew of some 200 “violence-promoting Islamic extremists” living in Sweden, has also faced criticism after acknowledging that Saturday’s bomber did not figure on the list and had never been on its radar.

The episode also prompted soul-searching in Britain, where Abdulwahab had been living in recent years with his wife and three children, after it emerged the man who would have turned 29 the day after the attack had a reputation for extremist views.

The chairman of a mosque in Luton, near London, where he used to worship said he had stormed out in 2007 after being confronted over his support for jihad.