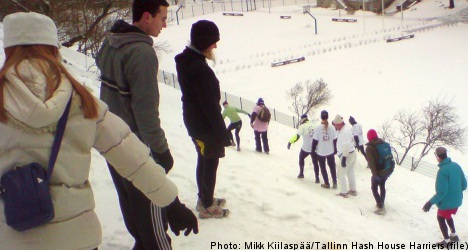 As it turned out, the powder thought to be rat poison were simply markers for a local running club’s route.

“Someone had seen the marks and thought it was rat poison,” Stockholm Hash House Harriers secretary Lars Wikström explained to The Local on Thursday.

“Central dispatch at the police know what we are about and there are police officers who are hashers in Stockholm and London. No one had called the police. It always helps,” he added.

Wikström is a member of the local chapter of the Hash House Harriers, an international group of non-competitive running, social and drinking clubs.

He explained that the pink powder was apparently left over from the group’s run on Saturday afternoon.

Warnings about the powder first surfaced on Monday along Hornsgatan around Zinkensdamm and Tantolunden, presumably from a concerned dog walker, Wikström said.

Newspaper Dagens Nyheter (DN) reported on Wednesday that the warnings had spread on Facebook and Twitter, describing the powder as “particularly well laid out around lampposts along house walls and fences.”

The city of Stockholm first received a report about the pink powder on Tuesday, while Södermalm police announced that a private individual had submitted a sample to the police for analysis, the report said.

The local Stockholm Hash House Harrier chapter runs on Wednesdays and Saturdays for anywhere between one to one and a half hours, with the Wednesday Hash more focussed on drinking than running. Both runs attract between 20 to 25 participants.

The incident dominated the club’s mailing list discussion until the identity of the mysterious matter was finally made public on Wednesday.

“It was nothing really. There is pinkish material there, there and there. No one puts rat poison out like that,” said Wikström.

He explained that the group usually uses white powder to mark its routes, but switches to pink in the winter when it snows.

Although the pink powder mix-up is the first time the Stockholm chapter stumbled into such a public misunderstanding, other groups around the world have been less lucky.

“A couple of years ago, there was a scare in Helsinki when someone reported ‘white stuff’ around the Norwegian embassy. Someone said, ‘Oh, it’s just Hash markers,’ but they didn’t believe it,” Wikström recalled.

Further afield, an ophthalmologist and his sister were both charged with first-degree breach of peace, a felony, for sprinkling flour in an Ikea parking lot in New Haven, Connecticut to mark a trail for a local Hash in August 2007, prompting the evacuation of the store.

Separately, a US Marine lieutenant was dismissed from the Corps and sentenced to 30 days’ confinement in January 2004 for participating in lewd conduct with enlisted Marines as a member of a local Hash club in Okinawa, Japan.

Other Hash groups in Sweden exist in Vimmerby, Blentarp, Ludvika, Mölndal and Kalmar.