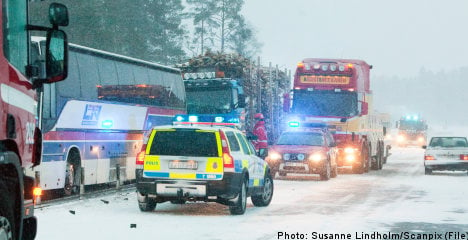 “Slippery conditions will continue across the country. There is already a lot of snow on the roads,” SMHI’s Elin Torstensson told the TT news agency.

She explained that Sweden has experienced more cold days and more snow than is normal for December.

“There were a number of days in a row with below-freezing temperatures, so called ice days. And that we have that before Lucia (December 13th) hasn’t happened in more than 100 years,” she said.

In Örnsköldsvik in eastern Sweden, 2,300 customers of the Vattenfall power company were without electricity for several hours overnight. As of 7am Friday morning, about 1,000 households remained in the dark.

And an additional 1,000 homes lost power in Västerbotten in northern Sweden in the wake of the storm, which dumped a blanket of thick snow on much of the country.

However, according to Vattenfall spokesperson Magnus Örvell, the outages were likely caused by the storm’s heavy winds.

The fierce winds and continued snow also caused problems at many of Sweden’s airports, according to airport operator Swedavia.

Passengers are encouraged to contact their airlines for the latest information about possible delays.

Rail service was also affected by the storm. In Skåne in southern Sweden, trains traveling between Malmö and Lund were replaced with buses, and other trains were redirected via the Lommabanan route, according to the website of the Swedish Transit Authority (Trafikverket).

Trains traveling between Ängelholm and Båstad in western Sweden are experiencing 25 minute delays because of switching problems, while track problems have resulted in buses replacing trains between Karlskrona and Emmaboda in southern Sweden.

Swedish motorists also had trouble dealing with the wild winter weather. A long-haul truck slid off of route 56 north of Heby in central Sweden. While no one was injured, the road was blocked as crews struggled to clear away the trucks spilled load of gas canisters.

Outside of Luleå in northern Sweden, a school bus collided with a logging truck on Thursday, sending eight children to hospital for observation.

In Skåne, around 35 accidents were reported on Thursday, five of which resulted in injuries.

Meteorology agency SMHI has issued a class 1 warning covering all of northern Sweden due to the large amounts of new snow, combined with the strong winds.

The agency also forecasts that the snow will continue throughout much of the country on Friday.

Snow showers are expected to continue throughout the weekend over parts of Götaland and southern Svealand in central Sweden, with light flurries forecast for the north of the country.

Temperatures on Saturday are expected to range from a few degrees below freezing in Götaland to -25 Celsius in the far north, before cooling somewhat on Sunday when temperatures in the northern Sweden may dip down to 35 degrees below zero.