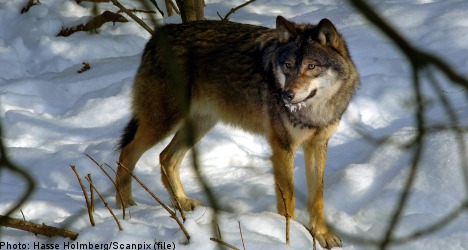 The Swedish Environmental Protection Agency said that from January 15th to February 15th, 2011, licensed hunters will be permitted to shoot 20 wolves, down from the quota of 27 animals this year.

The Swedish parliament decided last year to limit the wolf population to 210 animals, spread out in 20 packs, with 20 new pups per year, for a period of five years by issuing hunting permits in regions where wolves have recently reproduced.

It was important to keep the quota low “to not strain the population more than necessary to reach the parliament’s target,” agency chief Maria Ågren said in a statement.

This year’s hunt, when all 27 wolves were killed in just the first four days of the season, was the first since 1964.

The hunt was blasted by ecologists as rushed, cruel and lacking coordination, as some 12,000 hunters had been granted permits to kill the 27 animals.

Environmental group WWF also strongly criticised Friday’s decision, insisting it “lacks a scientific basis” and maintained that the hunt was “random” and risked killing off “a large number of genetically valuable animals.”

“It is surprising that the wolf hunt will be permitted,” Tom Arnbom, head of WWF’s predator division, wrote in a statement, insisting the hunt would do little to improve the problems posed by inbreeding within the Swedish wolf population.

“Today the government has decided in favour of a widespread hunt, but without providing any suggestions of how the wolf population should be strengthened genetically,” he said.

However, Monica Eriksson of the environmental protection agency insisted there was nothing random about the hunt to AFP.

She pointed out that in areas known to have “immigrant” wolves or their offspring, and thus with new genes, “no hunting permits have been given.”

The Green Party also lashed out at Friday’s decision, pointing out that the European Commission had not yet concluded a probe into the legality of the hunt.

“Now the commission might pull Sweden before the EU court at the end of January at the same time as a new group of wolves is being killed in the Swedish forests,” Green MP Åsa Romson said in a statement.

Meanwhile, Eriksson said there was no indication when the commission would reach its decision, adding that until it does, “the hunt will go ahead.”