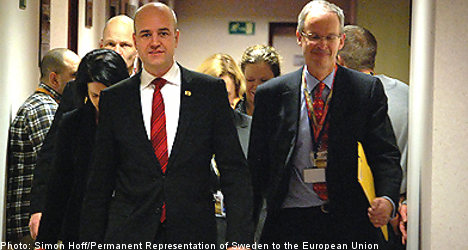 “We see [the initiative] as a bit unclear and from Sweden’s perspective, not budget-restrictive enough,” Reinfeldt said of a text hammered out by Britain, France and Germany, among others, stating their stance against overspending in the bloc to be presented Saturday.

Finland and the Netherlands are joining that declaration, said Finnish President Mari Kiviniemi.

For the 27-nation bloc’s 2014-2020 budgetary period, the leaders will call for a real-terms freeze, meaning it could not rise above inflation, he said.

“This is an attempt by a group of countries to emphasise that the EU’s budget cannot grow too much. Our opinion is that even the possibility for budget growth the signing countries open for goes too far,” Reinfeldt told SR.

Asked if this meant Sweden wanted deeper budget cuts, he said, “It is rather that we don’t want (the budget) to grow as much as their description could entail.”