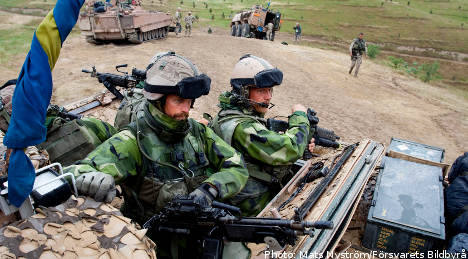 The documents were sent from the US embassy in Stockholm, according to a report in the Dagens Nyheter (DN) daily.

The information was dated July 2009 and details that September was considered to be the best month to exercise pressure as the Swedish foreign and defence ministries would then be busy with bills to be submitted to parliament.

The documents detail the opinion that once the parliamentary bills were submitted it would be more difficult to influence the Swedish force in Afghanistan.

A further plan was for the Swedish defence minister Sten Tolgfors to be flattered and thanked for Sweden’s growing commitment in Afghanistan during a meeting in Washington on July 20th 2009.

Furthermore the documents show that a senior official at the Sweden defence ministry has forwarded advice on how the United States could influence Sweden’s power-brokers to deploy more resources to Afghanistan.

The official told DN that he discussed the matter at the US embassy in Stockholm.

In the months following the attempts to influence Sweden’s Afghanistan commitment, the country has dramatically increased its expenditure.

The Swedish share of the cost for the International Security Assistance Force (Isaf) will amount to more than 1.5 billion kronor ($220 million) in 2010, an increase of almost 50 percent on 2009.

Sweden first deployed troops in Afghanistan in the beginning of 2002 and now has around 500 troops based near the northern city of Mazar-i-Sharif.

In December the parliament passed a government bill to extend the military mission in the war-torn country until the end of 2011, allowing for the deployment of up to 855 people.

The bill required a compromise between the governing minority centre-right Alliance and the opposition Social Democrats and Greens, and came barely a week after a suicide bomber cited Sweden’s troop presence in Afghanistan in a message sent shortly before he blew himself up near a crowded pedestrian street in central Stockholm.