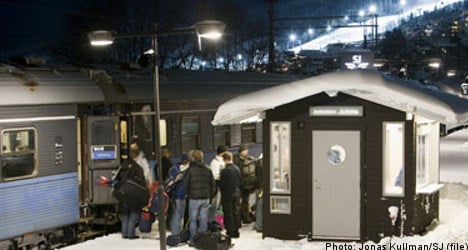 Sweden’s meteorological agency SMHI has retained its class one (of three on an ascending scale) weather warning for parts of the country as heavy snow is forecast, holding out the promise of a Christmas Day record.

Rail services in southern Sweden are running limited services on Tuesday due to problems with ice and snow on the tracks with the reduced traffic extended until at least Thursday in Skåne.

The Malmö-Lund route is usually served by 350 trains daily but over the remainder of the week this number will be reduced to around 250.

SMHI’s class one warning applies to Blekinge in the south and parts of north-east Sweden where up to a decimetre of new snow is expected to fall during Tuesday.

Conditions will ease on Wednesday, only to return to heavy snowfalls on Thursday – in time for the most intensive Christmas travel period.

In order to tackle anticipated problems on Sweden’s railways, national operator SJ has commissioned a large number of coaches to prevent the prospect of stranded passengers, and coach operator Swebus has deployed a further 140 vehicles to meet extra demand on Wednesday and Thursday.

Swebus’s press spokesperson, Ingvar Ryggesjö, urged travellers to be out in good time to book tickets and to check weather forecasts before beginning their trips – regardless of whether they elect to take the train, coach or car.

“Take water and warm clothing – it is no less than freezing out there,” he said.

For those completing their journeys in time for Christmas Day, the prospect of wintry fun is on offer as heavy snowfalls across Sweden promises to break records set in 1981, when the entire country was covered by more than a decimetre of snow.