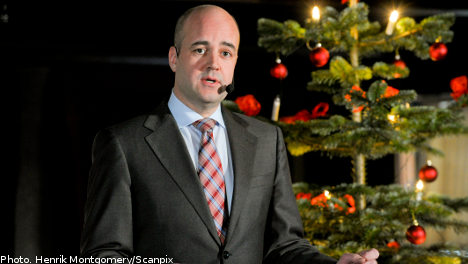 Speaking at Skansen open-air museum in central Stockholm on Monday, Reinfeldt focused on the recent terror attacks which killed the bomber and left two people injured.

Reinfeldt described the bomber, who blew himself up before reaching his presumed destination of a crowded shopping district, as someone who hates that which Sweden stands for – freedom, openness and diversity.

The prime minister also referred to the fact that the attack was apparently carried out with a religious pretext.

“It had to do with religion. It is difficult to understand a secular country such as Sweden. From a starting point in religion the right is claimed to threaten others.”

Reinfeldt underlined that the religions are not ranked according to importance in Sweden and that even atheists deserve respect for their non-faith.

“In multicultural Sweden the religions exist side-by-side,” he said.

Furthermore, Reinfeldt reserved praise for the strong reactions from Swedish Muslim leaders after the attack and argued that imams and others had clearly defended Sweden’s openness and condemned the terror attacks.

“I welcome the fact that Muslim Sweden has unequivocally stood up.”

Reinfeldt interpreted the reactions in that there is a strong sense of unity over the importance of fighting for openness, freedom and diversity in Sweden.

He stated that everyone can understand the importance of upholding “the contract”, which means that you can’t just make use of openness and freedom for your own gain, but do your bit to enable others to be able to do the same.