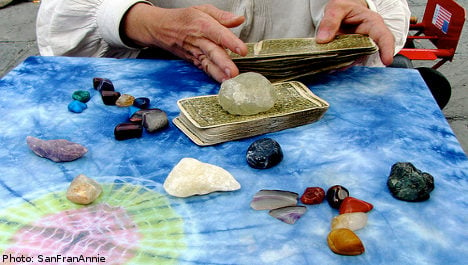 The case dates back to November 2002 when the woman reported the psychic medium to the police alleging fraud. The woman claimed that she had paid the medium 29,000 kronor ($4,300) in 2000 seeking to “burn away all the evil” and help her to recover from mental illness.

The woman had no receipt to forward to the police but was able to divulge her surname, approximate age and address.

After a second person came forward with the same complaint, the psychic was then told of the fraud suspicions against her during a police interview held in February 2004.

After a series of no shows to court summonses by the medium, the case dragged out into 2007 and was eventually handed over to Solna District Court.

But despite a court ruling to remand the medium, she remained elusive despite repeated police attempts to bring her into custody and the case was eventually dismissed on May 19th 2010.

The plaintiff declined the opportunity to conduct a civil case for damages against the Spånga-based medium as she was known to be without realisable assets and had a series of outstanding debts with the Swedish Enforcement Authority (Kronofogdemyndigheten).

Sweden’s Chancellor of Justice (Justitiekanslern – JK) has now instructed the National Courts Administration (Domstolsverket) to pay the woman compensation finding that her right to a trial in accordance with the European Convention had not been met.