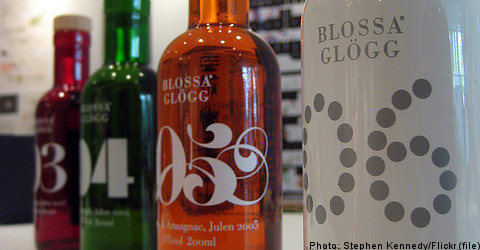 Systembolaget, the monopoly alcohol retailer, reported that the cold weather had increased pre-Christmas demand for the beverage, leading to a run on supplies. In a statement on its website, the chain said it was sorry for what had happened. It added that it had bought all the glögg available from its suppliers, but it had not been enough to satisfy demand.

By Wednesday night, many stores had sold out of all brands completely. Shelves had been restocked by Thursday morning, but with a limited supply.

“There’s unfortunately a risk that we will run out before the stores close,” said Lennart Agén, spokesman for Systembolaget.

In an attempt to save countless Christmases, the monopoly has published a selection of recipes on its website to help disappointed customers make their own mulled wine.

A morsel of ginger

Sweet almonds and raisins to serve.

Crush the cardamom pods with a pestle and mortar and break the cinnamon sticks into small pieces. Put all the spices into a container with a lid, and pour over the vodka. Put the lid on the container and allow to stand overnight so that the flavours are absorbed. The next day, pass the vodka through a sieve to remove the spices. Then mix the vodka, wine, sugar and vanilla sugar. Heat the glögg and serve with the almonds and raisins.

CHRISTMAS
How to make your own Christmas julbord if you live outside Sweden
Url copied to clipboard!