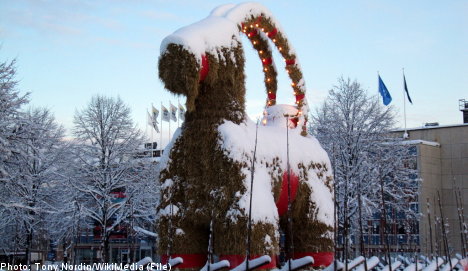 The town of Gävle is possibly best known for its celebrated Christmas Goat (Julbocken) which has been erected in the town’s main square, Slottstorget, every year since 1966. While half the town takes pride in the straw goat, the other half takes equal pride in attempts to burn it down. To date, the goat has been burnt down more times than it has survived the Christmas period.

This year, a record level of security seems to have paid off and the goat has made it through to Christmas Day, despite many efforts, including an attempt to bribe the security guard to the tune of 50,000 kronor ($7000).

The threat to goat, which stands 13 metres tall is not over yet, as the plan is for it to stand until the 3rd of January when it will be dismantled properly. Even the police know that they cannot rest on their laurels even though the goat has survived this long

In 2008, the goat survived Christmas Eve and Christmas Day, only to be burnt down on December 27th.