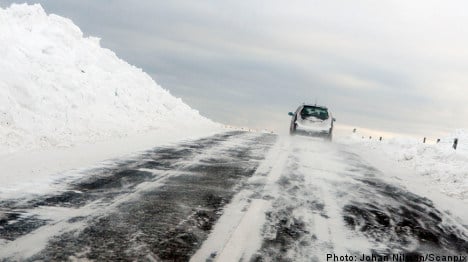 Road traffic was calm and orderly on Sunday, while problems with train services persisted in Skåne in southern Sweden.

A class 2 warning (of three on an ascending scale) was issued on Sunday for serious traffic problems due to abundant snowfalls and hard winds along the Gävleborg coast and Västernorrland. But the anticipated chaos did not materialise and the warning was downgraded to a class 1 warning in the evening.

In the mid-afternoon a somewhat surprised duty officer in the province of Västernorrland told of a calm day on the roads.

“There has not been anything yet, no traffic problems. But it feels as if something is going to happen. It is awful weather out there, when you look out it is crazy,” said Markus Holmberg at Västernorrland police to the TT news agency.

Gästrikland emergency services also reported a calm weekend with only a few minor traffic accidents and no serious injuries.

“I think that people going out on the roads are driving considerably more cautiously than they would have done without the warnings,” said Max Forsström at Gävleborg police to the TT news agency.

Meanwhile in Skåne, roads remained treacherous but during the day more were cleared of snow and could reopen for cars.

Trains continued to experience problems however.

The Ystad line also had problems which are set to continue over the coming days. By the evening trains were running from Malmö to Skurup, and on Tuesday it is projected that trains could go all the way to Ystad. All traffic from Ystad to Simrishamn however remained at a standstill and it is expected to take several days before trains are running again.

At Iggesund south of Hudiksvall a snow removal vehicle derailed and several trains were left queuing to continue on their route. Shortly before 7pm the vehicle had been removed and traffic could be resumed.

A further snow removal vehicle broke down and remained stationary north of Hudiksvall in northern Sweden, blocking traffic. At least three trains were expected to be one to two hours late.

Only one of the six passing places for trains along the coast of Norrland was in operation, according to press officer Beisi Sundin at the Transport Administration (Trafikverket).

At 9.30am on Boxing Day, the situation remained calm with regards to road traffic.

“It has been quiet along the Norrland coast, people have taken the warnings seriously,” Beisi Sundin said.