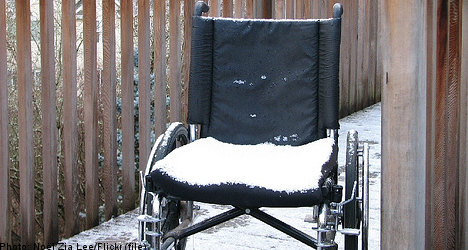 Two men and a woman were caught on Sunday at 7pm after cleaning out two basement storage areas of an apartment block on Larmvägen in Helsingborg in southern Sweden, newspaper Kvällsposten reported on Monday.

“People had seen them at the spot, but they had managed to escape. However, since two of them were in wheelchairs, they did not get very far. The tracks were not difficult to follow in the snow. We did not even need a dog,” Leif Nilsson, an internal officer in command of the Helsingborg police, told Kvällsposten.

The three were arrested a short distance away on Minörgatan. The suspects were all previously known to police, but none were known to have used wheelchairs before.

The 44-year-old woman and the two men, aged 26 and 39, were taken to police headquarters in Helsingborg, where they were questioned through the evening and night.

The police have not yet recovered some of the stolen goods, the report said.

“However, we have recovered a pipe wrench in the seizure, which we presume was used as a theft tool,” Nilsson told Kvällsposten.