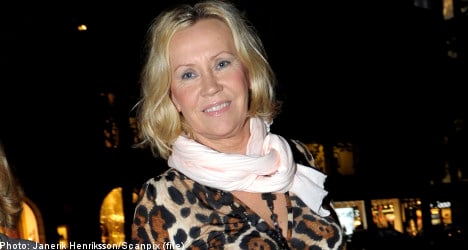 The famously reclusive star has not yet consulted her former bandmates about the possibility of reuniting with the group, she said in a lengthy interview with M Magazine.

However, she wants to meet with former husband Björn Ulvaeus and former couple Benny Andersson and Anni-Frid Reuß von Plauen to discuss the possibility of performing together again, Expressen reported on Sunday.

“A reunion, an occasional opportunity, maybe in connection with a charity event, I believe we could consider it,” she told M Magazine, according to Expressen.

“We would not reunite for a tour like the Rolling Stones and other old bands do now. However, I could see us doing something together in the future. It is just a feeling I have that it would be fun to get together, talk a bit about the past and maybe perform together,” Fältskog told the magazine.

The group split in 1983, three years after Fältskog and Ulvaeus finalised their divorce.

Benny Andersson, commenting the prospect of a reunion in March, clearly stated that a reunion was out of the question.

Fältskog said that she is not in contact with the other band members, but the group members have stepped out together in recent years.

In July 2008, the four members stood together on the balcony of Stockholm’s Rival Theatre, which is owned by Andersson, for the Swedish premiere of the movie Mamma Mia! Fältskog arrived with Reuss, formerly known as Anni-Frid Lyngstad, and movie star Meryl Streep.

The occasion marked the first time all four members were photographed together in 22 years.

Separately, for the launch of the Abba World exhibition in Australia, Fältskog recorded an opening film with Andersson in June. In addition, Fältskog appeared at the opening of the Mamma Mia! musical in Copenhagen with Ulvaeus in October.

The group last worked in 1982 to record six songs intended for a new album that was never completed.