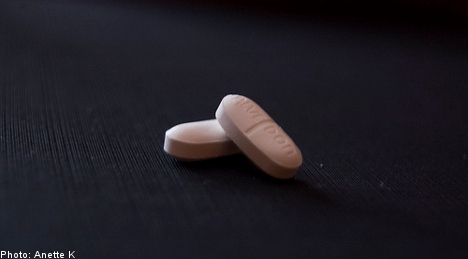 The equivalent figure for teenage boys is nine percent, while 10 percent responded that they never take painkillers.

SvD carried out their survey in November, a year since non-prescription painkillers were permitted for sale in supermarkets and stores other than registered pharmacies. It is unclear from the survey if the move to end the pharmacy monopoly has impacted use.

According to the survey some of the common reasons for taking a pill include, “when I am in a bad mood or sad”, “for sleeping problems” and “being overweight”, while a majority stated that they did so to combat a headache, followed by period pains.

Senior physician Inge Axelsson told the newspaper that popular products such as Alvedon have become “comfort pills” and warned against overuse.

“It is okay to temporarily take the prescribed dosage of non-prescription painkillers to alleviate pain, but absolutely inappropriate to eat continuously because it can cause side effects,” she said.

Side effects of overuse can include liver damage and chronic headaches, which are reported to afflict some 150,000 Swedes.

Svenska Dagbladet interviewed 1040 randomly selected teenagers aged 14-16 during November and asked how often and why they took painkillers.