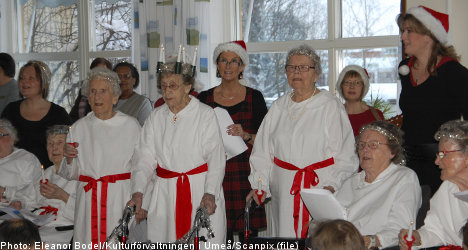 Emmy Granberg, who turns 105 on February, as Lucia at a Umeå nursing home

The number of Swedish centenarians is growing and an increasing number are often surprisingly healthy, according to Statistics Sweden (Statistiska centralbyrån, SCB) figures.

Sweden’s life expectancy has risen over the last century in step with the country’s transformation from a poor country to one with high living standards.

As a result, the number of Swedish centenarians is also growing. According to SCB’s latest figures from October 31st, Sweden was home to 1,665 centenarians.

Bo Hagström, a professor emeritus in gerontology, has met a considerate number of centenarians in his career.

“They may be frail and weak with poor balance, but they do not have many diseases,” he said.

In northern Sweden’s Umeå, Emmy Granberg, who turns 105 in February, recently portrayed Lucia at her nursing home’s pageant with a group of male and female attendants aged 75 to 98.

“One gets to take part when they pray,” she said.

“I usually call it ‘doing oneself justice,'” he said.

This includes being honest with oneself about who one is and what one wants in life, according to Hagström. It is unlikely that slaving away at a career in a job that one does not like will increase the chance of turning 100.