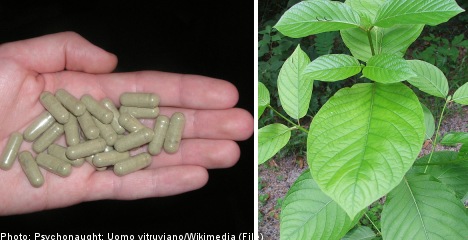 Pills derived from the kratom plant, shown on the right

Krypton is sold widely over the internet and is marketed as a safe drug but the risk of overdosing is high, the physicians have observed.

“Krypton reminds me of other opiates such as morphine. It is not some sort of party drug,” said Björn Bäckström, who works at the National Board of Forensic Medicine in Umeå, to the local Västerbottens Kuriren daily.

Bäckström, together with colleagues Gisela Classon, Peter Löwenheim and Gunilla Thelander, have penned an article published in the medical journal Läkartidningen warning of the risks of Krypton.

The National Board of Forensic Medicine receives intakes after deaths from across Sweden and one case involving Krypton led the physicians to consider the effects of the drug and found several more cases.

The Krypton-related deaths are spread across Sweden and involve both heavy addicts and occasional users, while they all concern people born in the 1970s and 1980s, the newspaper reported.

Krypton is derived from the south-east Asian plant kratom which has been traditionally used for potency and to improve mood. Aside from the leaves and extracts from kratom, Krypton has also been found to contain caffeine and the synthetic opioid O-Desmethyltramadol.

O-Desmethyltramadol is a breakdown of the product tramadol, which is prescribed in moderation to alleviate severe pain and when taken as Krypton is turned into tramadol in the liver and becomes more potent.

It is due to this high potency contained in the O-Desmethyltramadol that the risk of overdosing is considered high, leading to respiratory paralysis.

The Swedish physicians expect the extract and opiate to turn up in other forms if they are not classified as narcotics.

“That is one of the purposes of the article – to bring attention to this drug so that it should be narcotics classified,” Björn Bäckström told the newspaper.