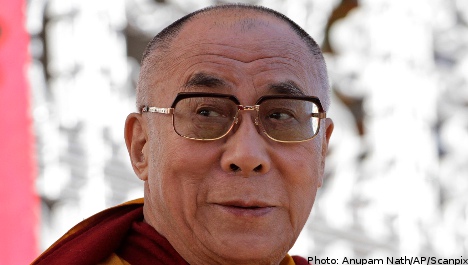 The visit is planned for April 15th-17th and will include stops in Lund and Stockholm, and could well be the last visit by the current Dalai Lama to Sweden after his announcement that he plans to retire to his home in Dharamsala, India.

The Lama has been invited to Sweden by the charitable organisation Individuell Människöhjälp (IM) whose chairperson, Håkan E Wilhelmsson, is also the dean of Lund Cathedral.

“He is one of the people who the whole worl respects as a spokesperson for the whole of humankind,” Wilhelmsson told the newspaper. “It is a great pleasure for us in Sweden to receive him.”

Wilhelmsson told the Christian daily Dagen that he sees no problem in a Buddhist leader taking part in a protestant church service.

“Everyone, regardless of religious or political beliefs, looks up to him… In every continent there are buildings for people to seek something beyond themselves, in Sweden it is the churches, in other parts of the world, other religious houses,” he said.

IM has had a long cooperation with the Dalai Lama, ever since they offered him support after his flight from Tibet after the invasion by Chinese forces in the end of the 1950s.