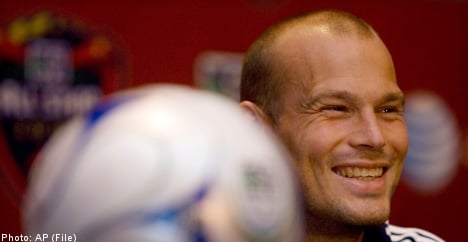 The 33-year-old Ljungberg, capped 75 times by Sweden, passed a medical on Thursday and could make his debut for the Glasgow giants in Sunday’s Old Firm derby away to bitter rivals Rangers at Ibrox.

“Celtic are delighted to announce the signing of Freddie Ljungberg,” said a club statement.

Ljungberg, who has been training with Celtic this week, was at Parkhead on Wednesday to watch the 1-0 win over Motherwell that saw the Hoops go back to the top of the SPL.

Although terms of the deal have not been disclosed, reports in the Scottish press have said Ljungberg has signed until the end of the season with a view to extending his stay if the move proves successful.

Celtic need cover for South Korean internationals Cha Du-Ri and Ki Sung-Yueng who both scored in Sunday’s 2-0 win over St Johnstone, their last club match before leaving for the Asian Cup in Qatar which starts next month.

Ljungberg, who has spent the last 18 months playing in the United States with Seattle Sounders and Chicago Fire, is due to give a news conference at Celtic’s Lennoxtown training centre on Friday.