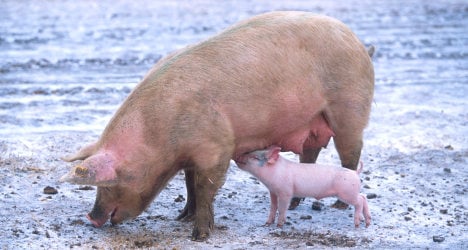 The alarm was raised early on the morning of New Year’s Eve in the village of Onslunda in Skåne, southern Sweden, as the roof of a pigsty collapsed under the weight of the snow. Incredibly, all of the pigs survived almost unhurt

“One of the pigs was limping and another had lacerations. But all the others were completely unhurt” Claes Jeppson, from the emergency services told reporters.

The pigs’ lucky escape may be due to the fact that most of the roof collapsed over their feeding station in the centre of the pigsty. The pigs have been evacuated to a neighbouring farm.

As temperatures have got slightly warmer in southern Sweden, snow on roofs has become heavier. There have been many incidents of roof collapse or the threat of collapsed roofs throughout late December.

Other buildings have had problems with the excessive ice including Malmö Art Gallery (Konsthallen) and Malmö Opera, both of which had to be partially closed due to leaks caused by frozen pipes.