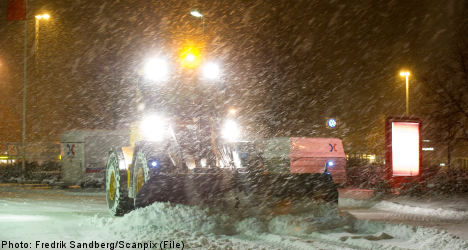 The Swedish Meteorological Institute (SMHI) has issued a Class 1 weather warning for the whole of the country except for northern Norrland.

Heavy snowfall has been forecast for central Norrland and southern Sweden with parts of Stockholm also affected. The Skåne and Halland regions will be worst affected as there are also strong icy winds on their way.

A Class 1 level warning is the lowest level of warning. It means there is a certain risk to the public with some disruption.

Up to twenty centimetres of snow is predicted to fall in Jämtland and western Norrland according to Alexandra Ohlsson from SMHI.

The island of Gotland is expecting sleet and snow as temperatures will be hovering around zero as the midnight bells toll. The temperature will then drop again through the night, making roads icy and hazardous to drive.

The low pressure will make its way to the Baltic on New Year’s Day, meaning that for those who want to take a refreshing New Year walk can look forward to clear skies above.