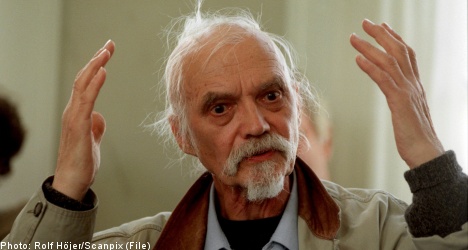 “Because of the heat from the remains, we haven’t been able to begin our technical investigation until today, but we fear that the couple were inside the house during the fire,” police officer Carina Anderson told news agency TT.

“But it was so hot they were forced to halt. There were even flames from the fire remains,” said Carina Anderson.

Technicians from Gothenburg are now going to examine the house, but will probably not be able to get started until after lunch today.

“Unfortunately it may be some time before we can confirm if there were people in the house during the fire,” she said.

Per Oscarsson, 83, and Kia Östling, 67, had lived in the house just over ten years. Several of their relatives live nearby.

“Relatives have told us that the couple was staying in the house over New Year’s. They haven’t heard that they had any plans to travel,” said Carina Anderson.

According to Bo Lustig of the Skara emergency services, the house was completely burned down when they arrived on the spot. Only the chimney remained.

“There wasn’t much for us to do. We put some water on it to lower the temperature, for the sake of the fire investigation. We cooled off the embers so that the police technicians can examine the house as soon as possible,” he told TT.

According to Bo Lustig, the fire must have started on Thursday evening.

“Then it was allowed to burn undisturbed all night. When a relative arrived around 11 am on Friday, the house was basically gone.”

Per Oscarsson is a film actor, best known for his award-winning role as Pontus in the film “Hunger”. More recent portrayals include the role as Lisbeth Salander’s lawyer in “The Girl Who Kicked the Hornet’s Nest”.