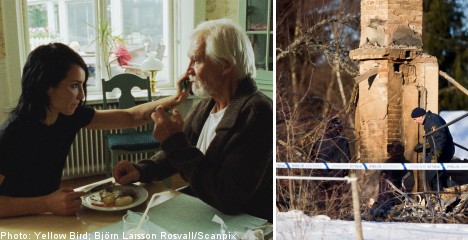 “Remains have been found, but we do not of whom,” Jan Strannegård, a police spokesman in the southwestern Swedish region of Västra Götaland, told AFP on Sunday.

On Monday afternoon, investigators told the TT news agency that the remains of a second body had been found among what remained of the Swedish actor’s home.

Oscarsson, 83, and his wife, 67, were both believed to have been home when their isolated house near the small town of Skara burned to the ground overnight Thursday.

“That is the hypothesis. We don’t have any other theory,” Strannegård said, pointing out that no one had heard from the couple since the fire.

Due to the heat, police technicians had to wait until Saturday to begin sifting through the ashes in search of the couple. At around noon on Sunday they discovered the remains of one person.

“We will keep looking for the other one today, and if we don’t finish today, we will continue tomorrow,” Strannegård said.

The cause of the fire was unclear.

Oscarsson is beloved in his home country where he has appeared in theatre, films, television series and popular children’s specials.

He won Best Actor at the 1966 Cannes film festival for his lead role as Pontus in Henning Carlsen’s “Hunger”, an adaptation of the homonymous novel by Norwegian Nobel Literature laureate Knut Hamsun.

Since news emerged he may have perished in the fire, tributes to Oscarsson filled Swedish media with him being described as a “legend of Swedish film” and a “captivating actor with a big heart”.