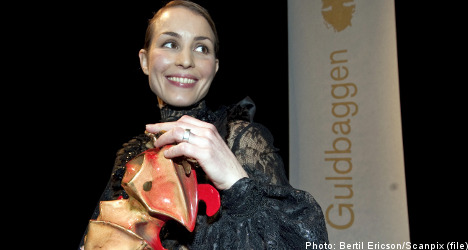 Other big names receiving nods for the Guldbagge Awards include Pernilla August, who won recognition in the director, actress and screenplay categories for two different films, and The Social Network, which chronicles the origins of Facebook, for best foreign-language film.

A 34-member jury voted by secret ballot on the three nominations for each of the 12 awards.

Up for the best film prize are Simple Simon, Sebbe and the August-directed Beyond. August was also nominated in the screenplay category for the film in collaboration with Lolita Ray.

In addition, she was honoured in the best actress category for her role in the gay-themed Swedish-Taiwanese co-production Miss Kicki, helmed by Norwegian-Taiwanese director Håkon Liu.

The movie will get the Hollywood treatment later this year in a still-untitled English-language remake, with actor Zac Efron rumoured to star in and produce the new version.

He is the only actor from the original trilogy to land a part in the English-language remake, in which he will play a different role. Dencik is up against Peter Dalle for his role in Behind Blue Skies (Himlen är oskyldigt blå), which also stars Skarsgård.

Films vying for the documentary prize include Familia, Kiss Bill (Så nära) and Regretters (Ångrarna). For best foreign-language film, The Social Network is up against Fish Tank and Lourdes.

Three additional awards will be handed out for best achievements in other fields that do not have prizes, as well as an award of honour, the Gullspira for extraordinary contributions in films for children and the audience award.

The ceremony will be held January 24th at Stockholm’s Cirkus and broadcast live on SVT.