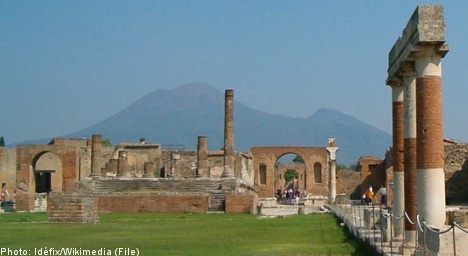 Scientists from Lund University have been on location in Italy since the year 2000, excavating and studying a city block.

“It’s gone amazingly well. We wanted to understand life in this town, where big and small lived side by side,” research manager Anne-Marie Leander Touati told the TT news agency.

The research project started out as a rescue mission. Following a large earthquake in 1980, large parts of the excavated ruins risked destruction.

Pompeii’s city antiquarian called for help. Several teams put in efforts, and in the year 2000 the turn passed to Sweden’s research team.

Over the years on the spot, six researchers and around sixty students have participated in the excavation of, among other things, three large buildings, an inn and a garden. Several discoveries have been made. Only this fall, four completely intact windows were unearthed, over 2000 years old.

The most unexpected discovery, however, was considerably older. In 2004, the team found an arrowhead dated to the Bronze Age.

“Nobody thought there were humans in Pompeii that early”, said Anne-Marie Leander Touati.

The research project will end with an exhibition at Millesgården, a museum in Stockholm. The exhibition is planned to open in 2012.