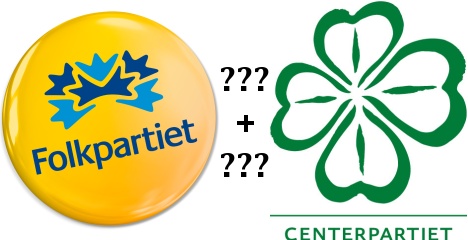 “Is there some intrinsic value in two liberal parties?” wrote Magnus Andersson of the Centre Party and Adam Cwejman of the Liberal Party in a joint opinion piece published on Newsmill.se on Friday.

Both parties “are struggling with their identity,” they wrote.

“Voter confidence is not at its peak and many wondering what the two parties stand for,” they wrote in Newsmill.se.

“It is always good to reflect on one’s party and others, but I see no need to merge the Centre and Liberal Parties. If anything, the trend is goes in the opposite direction, voters want more alternatives and nuances in politics,” she told news agency TT.

The proposal has surfaced periodically since the 1970s. As such, the question is why the idea always comes back, but never gains a foothold.

As party secretary of the Liberal Party, the Centre Party’s considerably larger coffers have not escaped Larsson’s notice.

“It is no secret that they have significantly greater resources, but that is not what politics is all about. I think the reasoning focuses too much on maximising votes, but there is nothing that says that it will automatically happen only by merging parties,” she said.

Political scientist Ulf Bjereld, a Social Democrat, does not believe in the merger idea.

He believes the reason the idea has popped up now is due to the Moderates’ strong dominance of the government and public opinion. The smaller parties are considering how to strengthen their positions within the centre-right Alliance.

However, a merger could instead lead to a loss of voters, said Bjereld.

“The risk is that these Center voters would not feel at home in a merger with the Liberal Party and would instead seek out the Christian Democrats or Moderates,” added Bjereld.

Centre Party party secretary Michael Arthursson also does not believe in the idea.

“It is always good that the youth organisation is on the ball and look for new roads, but there is no ongoing discussion with us. The important thing for us now is the development of ideas and directing the strength outward. The risk of a merger is that one gets stuck in the internal organisational issues,” he told TT.

Arthursson shares Bjereld’s view that a merger could lead to many Center Party supporters feeling lost in such a new party and instead going elsewhere.

“The risk is obvious. We should have more confidence than that. The Moderates have not grown through a merger, but because they were good at politics and communication and we have the same opportunity to do so,” he said.

2022 SWEDISH ELECTION
INTERVIEW: Sweden has been ruled for four years on ‘essentially the Centre Party’s programme’
Url copied to clipboard!